Rafa Nadal warmed up for the French Open with a battling 7-5 1-6 6-3 win over world number one Novak Djokovic as the Spaniard claimed a record-extending 10th Italian Open title in Rome on Sunday in the latest chapter of their rivalry.

After a mid-match wobble, Nadal turned up the heat in the decisive moments of his 57th meeting with top seed Djokovic - the pair's ninth in Rome - to secure the victory over the defending champion in two hours and 49 minutes.

"I was lucky in some moments, especially against (Denis) Shapovalov," Nadal said, referring to the round of 16 match he won in a tiebreak in the decider.

"And then I think I played a good tournament, I have been playing better and better, finding my rhythm on clay. I had a very positive week and I'm very happy.

"It's amazing to have this trophy in my hands for the 10th time. It's something impossible to imagine but it happened so I'm super happy and can't thank my team enough."

Nadal broke to go ahead 6-5 in a tight opening set and staved off a late comeback attempt from Djokovic to take the early advantage in the contest with a searing inside-out forehand that caught the Serbian off guard.

But Djokovic, who lost to Nadal in their previous meeting in the Roland Garros final last year, pounced in the second set to race ahead 5-1 as the Spaniard's intensity dropped and quickly levelled the match at one set apiece.

Second seed Nadal then saved two break points at 2-2 in the decider and fired an emphatic shot down the line to hold, before switching gears to complete the win and match Djokovic's record of 36 ATP Masters 1000 titles.

Nadal will now target a 14th French Open crown when the claycourt Grand Slam begins on May 30. 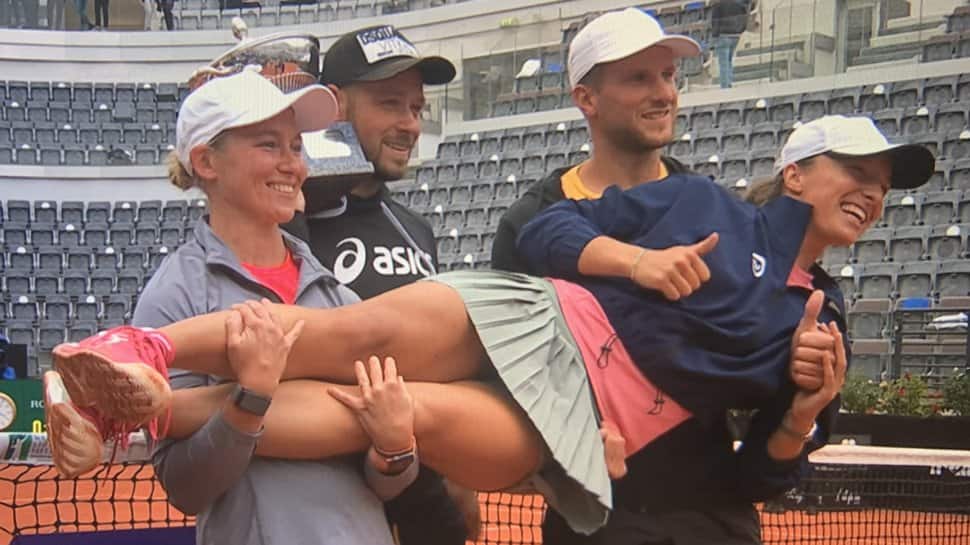 French Open champion Iga Swiatek served a warning to her rivals ahead of the claycourt Grand Slam with a 6-0 6-0 demolition of former world number one Karolina Pliskova in the Italian Open final on Sunday.

The victory in 46 minutes meant the world number 15 from Poland, who shot to fame at Roland Garros last year by beating Sofia Kenin in straight sets in the final, will enter the top 10 for the first time when the new rankings are out on Monday.

Swiatek`s third title overall following triumphs at Roland Garros and Adelaide came on the back of one of the most dominant performances of the 19-year-old`s career as she dropped only 13 points against the Czech, who was the 2019 Rome champion.

"I'm really happy to win this tournament in Rome, it's been a tough week from the beginning," said Swiatek, who won her quarter-final and semi-final matches in straight sets on Saturday after they were postponed due to rain.

"I'm really happy I got through everything and I was really focused today, so I`m proud of myself. Now I`ve finally earned some tiramisu."

She served with ruthless accuracy, winning more than 93% of points on her first serve, and converted six out of eight break point opportunities to close out the win against a frustrated Pliskova, who had no answers on the day.

It was also the first double bagel in the final of the Rome tournament and the most one-sided since Hungary`s Andrea Temesvari beat American Bonnie Gadusek 6-1 6-0 in 1983.

The French Open begins on May 30.

For more better and fast experience please install our app....